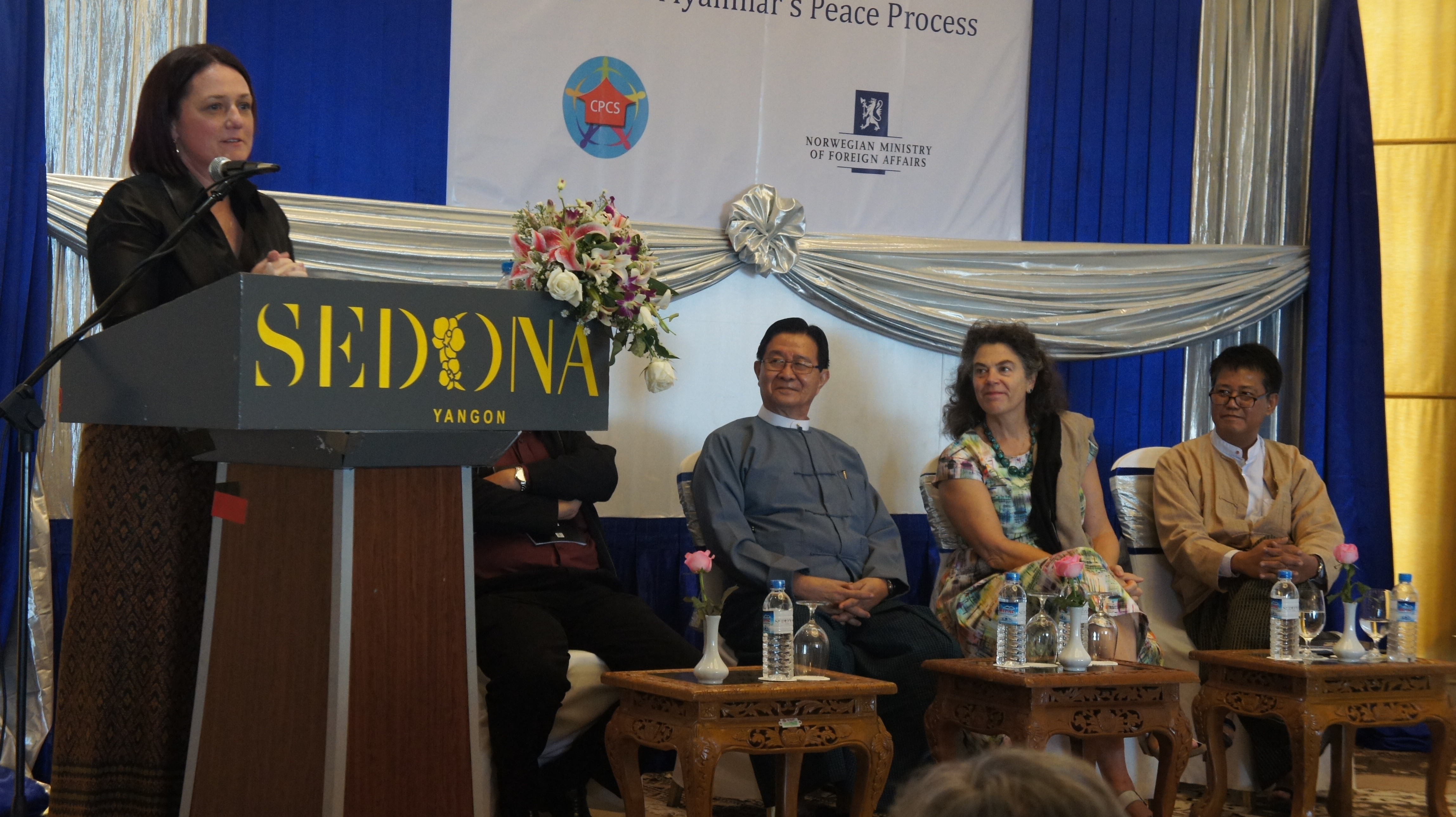 The following speech was delivered by Executive Director of Centre for Peace and Conflict Studies Emma Leslie at the launch of Making Peace in Their Own Words: People of Myanmar’s Peace Process on October 7, 2015, Sedona Hotel, Yangon, Myanmar.

Firstly, I would like to thank Lyndall Barry, our emcee this afternoon and a close friend and supporter of CPCS.  I would also like to acknowledge our friends and partners for peace who are represented here today: the governments of Norway, Australia and Switzerland, the European Union, the Shalom Foundation, Paung Ku, Karuna Myanmar Social Services, the Border Consortium, CAFOD, Trocaire, DanChurchAid, Pyoe Pyin, the Asia Foundation, CDA Collaborative, the Peace Support Fund, the KNU and ABSDF, and of course, colleagues from the Myanmar Peace Centre (MPC).

Clearly it takes a village.

I would like to thank those who have spoken before me today for their kinds words [Minister U Aung Min, Norwegian Ambassador Ann Ollestad, KNU General Secretary Kwe Htoo and ABSDF Chairman U Than Khe].  However this event and this book is not about me or CPCS, but about the ordinary individuals who have given their time and lives to support this peace process. 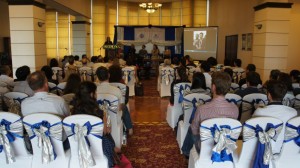 In particular I would like to make reference to those that paved the way for us all in building peace –  Daw Seng Raw, Reverend Savoi Jum, Rev. Mar Gay Kyi, Archbishop Mya Han, Dr. Rebecca Htin and family, and the many others who worked tirelessly for peace for decades, despite the seemingly insurmountable odds. Their efforts tell us that while the past four years have been significant, in fact the peace process is not new.

I would also like to acknowledge the innovative way this book was put together by CPCS peace historian Nerea Bilbatua.  This book has no narrative, no conclusion and no recommendations. Its power lies in that the voices, woven together, simply speak for themselves.

And if the myth that this peace process is new is unfounded, I would also like to use this rare platform to dispel three other myths about the Myanmar peace process.

The first myth is that the peace process started with the business community.  It did not, and this has been wrongfully reported many times.

This peace process started from a notion of peace by the peacebuilding community, that “peace is possible”.  It started with a sharing and willingness from all stakeholders to look outside of the box. 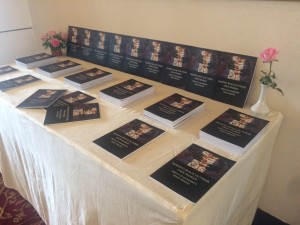 In 2008 after Cyclone Nargis, among many gatherings, there was a meeting in Phnom Penh hosted by Shalom which was the first meeting of Myanmar Egress and included others such as MCC, Sonny, U Hla Maung Shwe, Tin Maung Tann, Alan Saw U, Matthew Aye and many others.

At the time, we as NGOs and civil society representatives were petrified of Burman businessmen, but still we sat together to figure out what we did have in common. We discovered that our common vision was we all wanted something different for the future of Myanmar and an end to military rule.  At this meeting, the seeds and notions of peace were planted and relationships and networks were created.

And by 2011, when the late Nay Win Maung met U Aung Min and U Thein Sein, peace was possible. Who did they then reach out to make introductions? All those they had met in all of the forums who had their own connections to ethnic armed groups – people like Ham Yarnghwe and David Taw.

While our colleagues at MPC (previously Egress) have been a significant support, driver of, servant to and force for the process, I maintain that its roots are in those who waved the flag for peace many years prior.

It is for this reason I have great hope for the future of this process.

The second myth relates to the importance of U Aung Min’s sincerity. Is U Aung Min sincere? 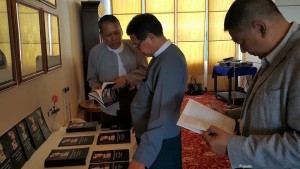 This question has been asked time and again from Chiang Mai to Mae Sot to Mae Hong Song to H’Pan to Laisa to Hakha to Brussels to New York to Beijing.

While this question has represented deep-seated trust issues and a desire for guarantees, and while it is important to know who Aung Min is, it is not the question to ask.

The key question here is, are we sincere? Can we be trusted with this process? Do we have the stamina it takes to build a robust, equitable, accountable and sustainable peace?

You will all note that we have not included Presidential Advisor U Aung Min in this publication, and I wish I could say this was strategic, but it is because he was not available at the time of writing.  No doubt much will be written in history about his role – both good and bad.

However our point in this publication is that it is the ordinary, yet extraordinary men and women, like Naw Zipporah, General Gun Maw,  Dr. Kyaw Thu, Lia Siakhong, and so many more both in and out of this book, who have overcome their fears, challenged their own stereotypes and prejudices, and have been working tirelessly to make peace. 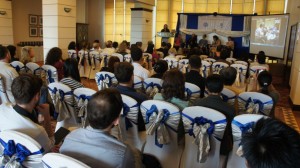 They are people like our dear friends Ja Nan Lahtaw and Nang Raw, who spend days, weeks and months away from their children and spouses in tireless, dedicated work for peace.  It is the likes of Kyaw Soe Hlaing and his wife Wit Hmone Tin Latt, who gave up their more lucrative business opportunities to travel the country to update civil servants on the process.  Its Kyaw Yin Hlaing, Andrew Lian Sakhong and Thi Han who have passed up academic and legal careers to work for peace in their country.

Yesterday, I was asked by colleagues in Europe to send the resumes of Pa’Doh Kwe Htoo and U Than Khe for an event they will speak at soon. I responded that a CV might not be in order as much as the recognition that they have spent their lives struggling for ethnic rights, justice and peace.

Individuals make peace. Indeed, this book is evidence of one of the central tenets of CDA’s Reflecting on Peace Practice theory of change matrix – when key individuals transform their attitudes and act, structural changes for peace becomes possible. 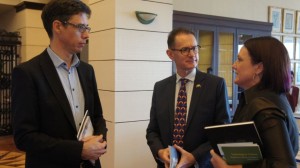 There are a variety of representatives of peace networks and organisations in this room today, and we all have the responsibility to critique ourselves – are we prepared to go the rest of the way – to build a robust and accountable sustainable peace? Are we sincere?

Lastly, I would like to challenge the myth that nothing has changed in past four years. How quickly we forget… we have all changed.

This book launch would not have happened four years ago.

We weren’t working with Buddhist monks four years ago. Earlier this year, I sat on the USIP stage in Washington, D.C. with Venerable Tayzadi and defended religious tolerance. This book is evidence that these people have changed, and next week’s National Ceasefire Agreement signing is further evidence that step-by-step, structures are changing too.

Don’t misunderstand me – the fact that we have made progress in the past four years does not mean that it’s enough.  If you live in DemoSo in Kayah State, Hakha or Sittwe, in the areas of Northern Shan, an IDP Camp, Mae La or in fear in a third country – the change is nowhere close to enough. There is much more work to do and this is only the beginning.  This change is only scratching the surface – it is not nearly enough.

But let’s use this moment to take stock.  Things have moved. Infrastructures for peace such as liaison office networks and conferences, peace committees, ceasefire monitoring networks, donor support and trust funds are all important structures to sustain the peace.  The changes in attitude documented in this book have created a space for dialogue and relationship across enemy lines, which did not seem remotely possible before. 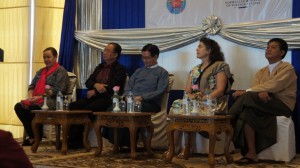 Next week, let’s support those who sign but equally those who do not. It takes courage to decide to sign a ceasefire, but equally courage to decide not to sign if the time is not right. It will be critical that following the signing of the NCA, peace dividends are delivered in significant and timely ways – both to those who signed so their decision is not in vane, and to those standing by, waiting to see the value of signing and questioning the sincerity of government in its commitment and ability to deliver.

Equally we must be very careful not to over-simplify our analysis of this current stage. This is not the 90’s over again, as I have heard some people say in the past week, with one large group in ceasefire and other not.  Those were gentlemen’s agreements made by one general. The NCA is a document backed by an infrastructure involving the President’s Office, the parliament and the Tatmadaw.

This is significant in itself.

Creativity in carving peace is at an all time high. The “out of the box” thinking it has taken to forge a progressive National Ceasefire Agreement, where armed groups who are ready can sign on, show resilience and an ability fostered in these recent years to accommodate diversity. This is truly Myanmar’s way to peace, with an important emphasis on “process” towards peace.

So, as those armed groups ready themselves to take their next leap of faith, we all need to take stock. We must focus ourselves on continuing to engage those whose fears prevent them from engaging, accompany those who can, and ensure meaningful and sustainable dividends from the NCA. Those evaluating and engaging in the process should be careful not to revert to over-simplistic black and white analyses of the situation but instead, as one person featured in the book says, “lets work with the grey”.

Let’s also take this moment, this book, this group of people, and let’s regenerate our energy and continue with the process.

We have to believe that more is possible.