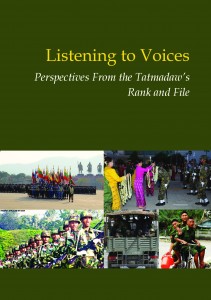 The Centre for Peace and Conflict Studies (CPCS) takes a conflict transformation approach to peace-building. CPCS focuses on supporting the transformation of relationships between groups involved in violent conflict and building inclusive engagement of all actors in peace-building and peace processes.

Listening to Voices – Perspectives from the Tatmadaw’s Rank and File elevates the voices of rank and file soldiers from the Myanmar National Army – the Tatmadaw. Comprised of interviews with soldiers conducted over a one-month period in 2014, the project seeks to challenge the stigma that often surrounds discussion of the Tatmadaw and aims to better understand soldiers within the structure.

The idea to listen to soldiers from the Tatmadaw’s rank and file grew out of observations and learning from the Listening to Voices – Myanmar’s Foot Soldiers Speak project, which spoke to 100 non-ranked soldiers from six non-state armed groups. On-going analysis and reflections that surfaced after this research and through working with various groups involved in the peace process identified that engaging the Tatmadaw is a key component for its lasting success.

Through listening to Tatmadaw soldiers, the project seeks to better understand how their experiences within the institution and being directly involved on the frontlines of conflict have shaped their opinions of peace and the peace process, and to better understand their concerns and desires for the future.

Listening teams went to six different regions across Myanmar, where military bases were located and found that soldiers could, and wanted to, share their opinions, experiences and stories.In total, the project listened to 67 soldiers over one month in June 2014. Soldiers were surprised and happy to be asked their opinions; a new concept to many who were part of a hierarchical structure where there was little space for individual voices. Soldiers shared a range of opinions and affirmed the project’s underlying premise that the voices of the Tatmadaw rank and file should be heard, understood, and included in the peace process.

This project is an attempt to look at the Tatmadaw as an institution comprised of individuals, to build awareness, share personal perspectives and highlight the diversity of the institution. It was carried out with the hope to engage the Tatmadaw more holistically in the peace process in the future.