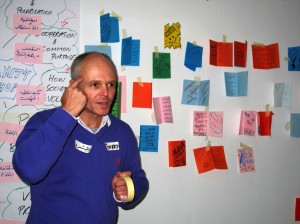 Richard Melville Smith is a peace and human security strategist from South Africa and a CPCS consultant. He has direct experience of post-conflict reconstruction in multiple countries including South Africa, Rwanda, Burundi, Somalia and Sierra Leone, and has worked on practical peacebuilding processes aimed at establishing community policing forums, encouraging truth and reconciliation, building local peace committees and strengthening peace infrastructures. With over twenty-five years of experience his approach to process facilitation, mediation, dialogue and transformative peace leadership is informed by a background in activism, in support of African peace processes, working with student, youth, women and workers organisations. He now works mainly with the international diplomatic community, senior government officials, policy makers and civil society leaders in his efforts to build consensus and find systemic solutions to peace and security challenges. He spent over two years living in Sri Lanka supporting the peace process from 1999 to 2001, and in Ethiopia from 1997 to 2000. Richard has been working in Myanmar since 2010 focused on dialogue and transformative peace leadership, and has been an associate of CPCS since its inception. He is a rostered Political Affairs member of the Southern African regional peacekeeping force and has worked in more than 35 countries across Africa, South East Asia and the Middle East. Richard is co-author of the Working with Conflict book and has published several articles and strategy documents. He has a B.Soc.Sc in Economics and Psychology from the University of Cape Town and an M.Phil in Conflict Management and Transformation from the Nelson Mandela Metropolitan University.