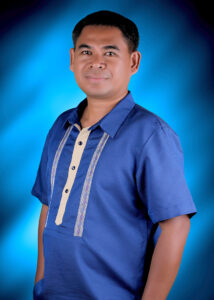 Yatz belongs to the Erumanen ne Menuvu, one of indigenous peoples groups in Central Mindanao, Philippines. In his younger years, he was exposed to his peoples’ peaceful and democratic struggle for right to self-determination particularly in reclaiming their 400 plus hectares ancestral land grabbed by the Bureau of Plan Industry (BPI) of the Philippine government.

After finishing his study in 2001, he started working with Southern Christian College (SCC) particularly under the office of the Institute for Peace and Development Studies (IPDS) to help build partnership and collaboration with partner agencies ad communities to promote peace and development. Being the Director of the office, he initiated forum, conferences, dialogue between and among the tri-people (Lumad, Bangsamoro, and Settlers and their Descendants) to propel better understanding and respect of distinct identity and self-determination of each people.

Presently, he is working as Director for Extension of SCC task to help in the transmission and utilization of need-based technologies, innovations to partner communities. In addition to his function, he is assisting the delineation and titling of ancestral lands of the indigenous peoples. He also helps in the restoration of indigenous self-governance system and facilitate the representation and participation of the indigenous peoples in the legislative bodies of Local Government Unit (LGU).

He is the chairperson of the Mindanao Peoples Peace Movement (MPPM), a peace and human rights coalition/network advancing sustainable communities of Just Peace. He is part of the team of the Independent Indigenous Peoples’ Voice (IIPV) in the Peace Process of the MPPM that advocates for the inclusion of indigenous peoples rights in the crafting of the Bangsamoro Basic Law (BBL), a law that will establish the Bangsamoro government in Southern Philippines.

Right now, he is a student of the Applied Conflict Transformation Studies Doctoral program by the Center for Peace Conflict Studies (CPCS) and Paññāsāstra University of Cambodia (PUC). His proposed action research is on improving inclusive peace and justice through on the experiences and perspectives of the indigenous peoples in the process of peace.

Yatz’s topic for dissertation is “Improving the Infrastructure of Peace through the process of Conflict Transformation Engagement of the Indigenous Peoples with the Bangsamoro and Government of the Philippines”.